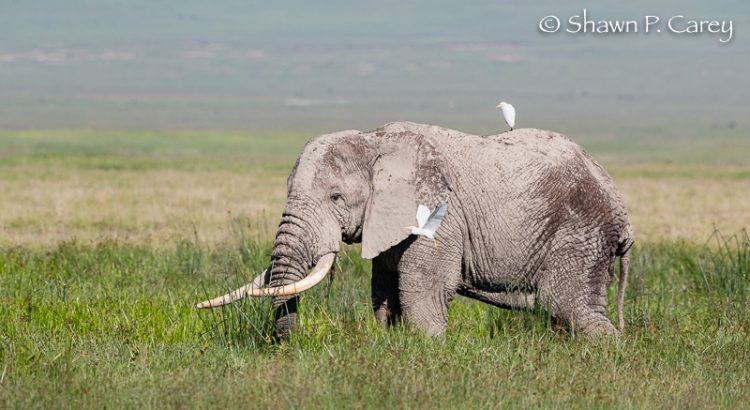 Whether you are a casual observer of wildlife or a serious photographer, Ngorongoro Crater will offer you a view of the natural world unlike most other places on the planet. The abundant wildlife, which is very visible as you drive throughout the park, is much the same as it was more than a hundred years ago. From one of the several lodges located on or near the rim of the crater, visitors have a view of the caldera from above that is breathtaking and awe-inspiring in its beauty.

On both trips I took to Tanzania, my group and I used a Sopa Lodge during our time spent at Ngorongoro Crater. Like all the Sopa Lodges we stayed at, the staff were very friendly and took great care to make sure we enjoyed our time there. The food was also superb and included a great buffet on Saturday nights. A unique element of the lodges is that visitors are assigned the same waiter for each meal. This allows you to get to know them and vice versa. For our time at Ngorongoro Sopa in 2017, our waiter was a gentleman named Goodluck. If there was a gold medal for the top waiter in all of Tanzania, Goodluck would win hands down. He was the absolute best and he always went out of his way to take very good care of us. Between our 2017 and 2019 trip, I had a few e-mail exchanges with him too, so when we returned to Ngorongoro Sopa on January 24, 2019 Goodluck was one of the first people to welcome us upon our arrival. For me, it was nice to reconnect with and thank him for helping to make our first trip so memorable. His attentive service was one of the reasons we returned to the lodge in the first place.

One thing I would like to address is the subject of tipping and what is appropriate. Tipping is often overlooked by many of the other websites and blogs I’ve read about traveling to Tanzania for a safari. The guidelines for tipping are not as clear as they are in the US. Depending on who you speak with, it is possible to get many different answer about what is recommended for tipping. For what is worth, we tipped about $15 each per day for our driver and guide, which came out to about $200 per person by the end of the safari. For our waiters at each lodge, as a group (there were 5 of us), we tipped $15 for each meal except the last night at we tipped $20. Again, this is total tip for five people, so $4 each. Additionally, one does not tip the staff at the lodges as they are doing their day-to-day work like house-keeping. The exception is the porters that take your bags to and from your room. In that case, a dollar or two is fine. However, we always made a point of not lettig the staff touch our camera bags. This was not a matter of trust, but we simply did not want to risk having any of them drop any of our fragile equipment.

On my 2019 trip, I pre-made envelopes for each lodge with the total trip for our group all ready to go. This took the guess work out of tipping, and I did not have to chase down each person for money while at each lodge. Everyone had already sent me a check before hand with their portion of the tips. This way I was able to take care of all the tipping after each meal and when we checked out. It made dealing with all of the tipping much easier for everyone. I only wish we had done this for our 2017 trip! As visitors check out of each lodge, they are encouraged to donate to a tip box located at the counter and are advised to leave a single tip for the entire time they stayed at the lodge.  The tip is supposed to cover  all the staff that helped you during your stay. The total lodge tip for each person was about ninety-five dollars. At one point, I asked to see a lodge manager to have a friendly conversation about tipping. He was kind enough to sit with me and talk about this subject.  He told me that ultimately  it’s up to each guest  whether they wish to tip or not. Needless to say, we had no problem leaving tips as they were always well deserved by the staff. They treated us VERY well and the level of service was first rate!

For both the 2017 and 2019 photo safaris, we used Nasera Safari to help us find country guide services and determine logistics. For each trip, we used two safari vehicles with one driver guide per vehicle. On the 2017 trip however we had a senior guide that joined us when we arrived at Ngorongoro Sopa Lodge. That was Joseph Ndunguru, who, at 72 years old, had worked for the Tanzanian Park Service at Ngorongoro Crater for almost 20 years. Having Joseph with us for the remaining days of the 2017 safari was a real treat. His knowledge of the land, people, and wildlife was both extensive and very helpful. Plus, he was just a lot of fun to be with. We really enjoyed his company and he enjoyed ours.

Having good guides makes a big difference when it comes to planning a successful photo safari and our guides did a very good job of getting us in right place each day of our trip. By the time I departed Ngorongoro Crater on both trips, I had a good number of quality “keeper” shots and had seen a wide variety of mammal species. These included many hippos, lions, Cape buffalos, black rhinos, and large “tusker” elephants which were usually observed in small groups.

I could go on about many more sightings and the great photo ops we had, but the magical part of the safari for me was simply the Ngorongoro Crater itself. I could have spent three months there and I want to return again next year. It’s an amazing, majestic place, and one that, in my opinion, everyone should see at least once in their life. In conclusion, if you are planning a photo safari to Tanzania, then I cannot recommend Ngorongoro Crater any higher. As far as I am concerned, it’s a must see!

Click here to view YouTube video with information on my photo safaris and interview with Joseph Ndunguru.

In part four, I will talk about the Ndutu area, so stay tuned!